"I Am Not Your Negro" movie 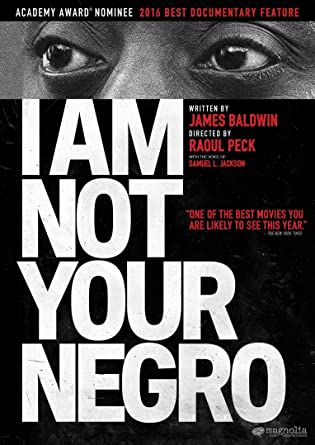 "I Am Not Your Negro" is a movie written by James Baldwin with the voice of Samuel L. Jackson.

DISCLAIMER: I Am Not Your Negro is a beautiful and harrowing film. Please be advised that it contains, especially toward the end, some disturbing images of lynching. Although the film uses racialized language, this does not give us, as a majority white audience, license to repeat such language in our discussion.

James Arthur Baldwin (1924–1987) was an American novelist, playwright, essayist, poet, activist, and former clergyman. His essays explore the intricacies of racial, sexual, and class distinctions in Western society, most notably in regard to the mid-twentieth-century United States. Some of Baldwin's essays are book-length, including The Fire Next Time (1963), No Name in the Street (1972), and The Devil Finds Work (1976). One of his novels, If Beale Street Could Talk, was adapted into an Academy-Award-winning dramatic film of the same name in 2018, directed and produced by Barry Jenkins.

Malcolm Little (1925–1965), better known as Malcolm X, was an African American Muslim minister, and human rights activist who was a popular figure during the civil rights movement. He is best known for his time spent as a vocal spokesman for the Nation of Islam. Malcolm X served as the public face of the organization for a dozen years, where he advocated for black supremacy, black empowerment, and the separation of black and white Americans, and publicly criticized the mainstream civil rights movement for its emphasis on nonviolence and racial integration. A controversial figure accused of preaching racism and violence, Malcolm X is also a widely celebrated figure within African-American and Muslim American communities for his pursuit of racial justice. In 1965, he was assassinated by three men in Manhattan before giving a public address.

Martin Luther King Jr. (born Michael King Jr.; 1929 –1968) was an American Christian minister and activist who became the most visible spokesperson and leader in the civil rights movement from 1955 until his assassination in 1968. King is best known for advancing civil rights through nonviolence and civil disobedience, inspired by his Christian beliefs and the nonviolent activism of Mahatma Gandhi. King led the 1955 Montgomery bus boycott and later became the first president of the Southern Christian Leadership Conference (SCLC). On October 14, 1964, King won the Nobel Peace Prize for combating racial inequality through nonviolent resistance. In 1965, he helped organize the Selma to Montgomery marches. In his final years, he became a more pronounced advocate for Christian radicalism, addressing perennial issues like poverty, capitalism, and American militarism.

Medgar Wiley Evers (1925–1963) was an American civil rights activist in Mississippi, the state's field secretary for the NAACP, and a World War II veteran who had served in the United States Army. He worked to overturn segregation at the University of Mississippi, end the segregation of public facilities, and expand opportunities for African Americans, which included the enforcement of voting rights. He also worked for economic opportunity, access to public facilities, and other changes in the segregated society. Evers was awarded the 1963 NAACP Spingarn Medal. He was assassinated in 1963 by Byron De La Beckwith, a member of the White Citizens' Council in Jackson, Mississippi.