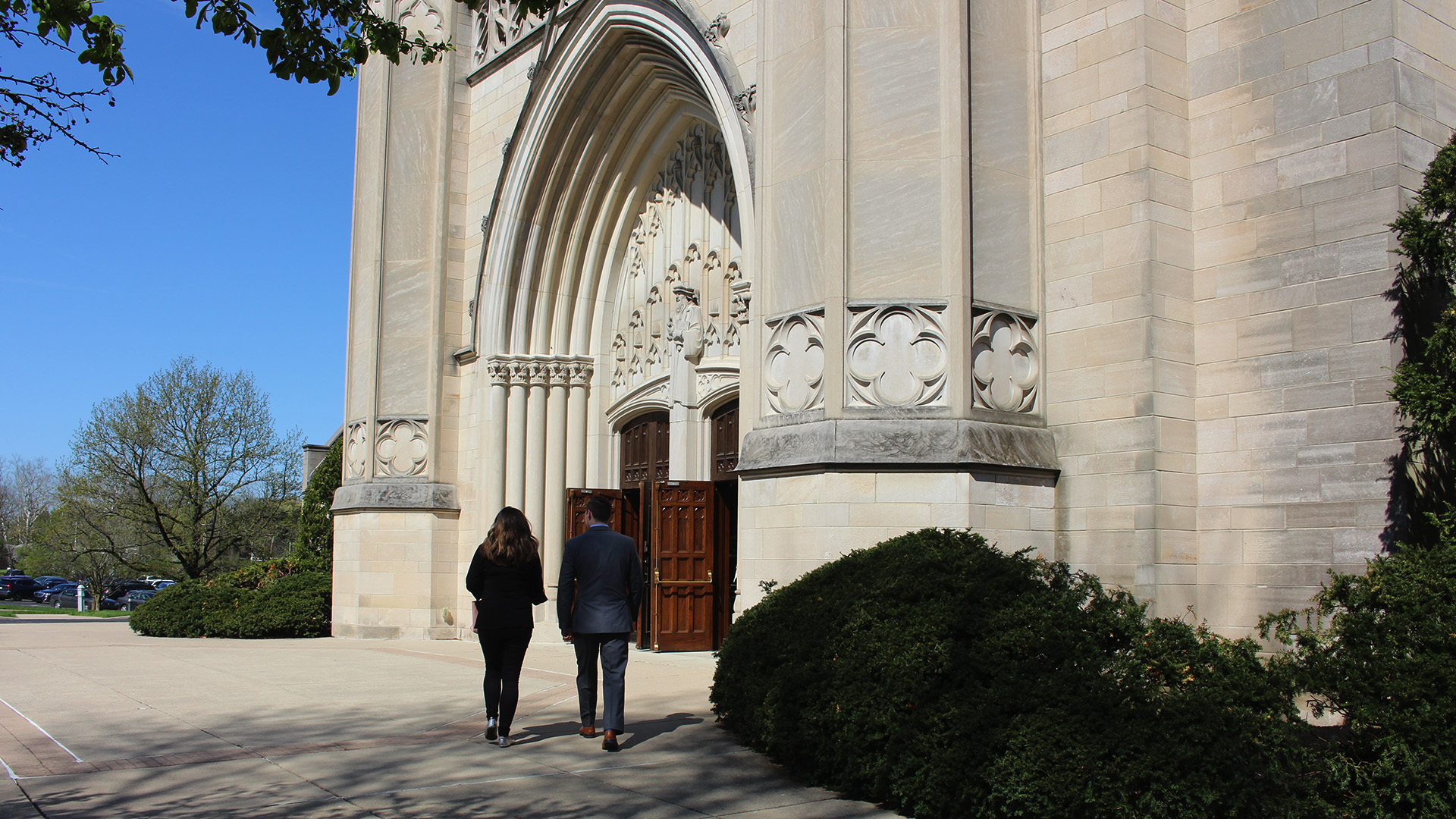 Today we support missions at home and abroad with our time, talents and treasures.

We welcome each person’s individual gifts and talents as an opportunity to share God’s love and grace with others in need.

A Brief History of The Second Presbyterian Church of Indianapolis

To put it in a nutshell, the differences of the two schools were as follows:

1838 – Fifteen members of First Presbyterian Church who were of the new school thinking broke away and formed the Second Presbyterian Church. They first worshiped in the Marion County Seminary, which was located on the Northeast corner of Meridian and New York Streets. In 1839 they called Henry Ward Beecher to be their first pastor. (Henry’s father, Lyman Beecher, was President of Lane Seminary in Cincinnati; his brother, Charles Beecher, was a musician and established the first Church choir in the city; his sister, Harriett Beecher Stowe, was an author of some renown, most notably Uncle Tom’s Cabin.)

1840 – Second Church moved into its first Church building, located on the northwest quadrant of Monument Circle.

1845 – The first women’s group of the Church was formed. It was called “The Ladies Sewing Society.”

1864 – The next most notable minister to be called was Dr. Hanford Edson. Under Dr. Edson’s pastorate many things happened:

1868 – Dr. Edson was the founder of the Indianapolis Public Library System. In a Thanksgiving Day sermon of November 26, he claimed “the deficiency that is really fatal to the city’s character is the want of a public library.” With this sermon, Dr. Edson rallied the city’s leaders and organized a campaign to begin a library system. Five years later, the first library opened at Pennsylvania and Michigan Streets with 12,790 volumes.

1870 – Our Church decided to move to the suburbs and we moved way out to the northwest corner of Pennsylvania and Vermont Streets, next to where the World War Memorial now stands. Dr. Edson was the first minister to see the importance of women in the Church. Prior to his ministry, only men had leading roles in the Church. Dr. Edson got the Elders of the Church to agree to a Female Industrial Society of the Church for visiting the sick and the poor and for evangelism generally. Also in 1870, Mrs. Edson organized a Women’s Missionary Society that visited new members, raised funds for foreign and domestic missions, served as a social center in the congregation and supported missionaries in Persia and Gabon and a school in Alaska. From this organization descended our current Presbyterian Women organization and the first annual Praise Luncheon (which is still a yearly event) was held.

1872 – Dr. Edson persuaded the Session to purchase a plot of lots in Crown Hill cemetery for $150.00 for the burial of the poor of the Church. Dr. Edson was also a founder of the Colored Children’s Orphanage which took in children of former slaves when their parents were injured or killed in their flight north.

1873 – Dr. Edson left Second Church to become the Senior Pastor of the Tenth Church, which was now called Memorial Presbyterian Church. During Dr. Edson’s Pastorate, Second Church grew from 195 members to 461 members. Taking into account the members who left the Church to colonize other Churches, Dr. Edson more than tripled the membership of the Church in just nine years, a feat no other minister in the history of the Church has come close to matching.

1878 – We started a Sabbath School for Chinese people who were working on the Transcontinental Railroad, which was coming from California. Also in 1878, Dr. J. G. E. Renner, a member of the Church, volunteered to go to Tennessee to help people who were victims of the yellow fever epidemic which was spreading throughout the south. While serving there, he contracted the disease and died. There is a monument on the Crown Hill Cemetery plot which says: “J.G.E. Renner, M. D., Born at Eschenrod Hesse Darmstadt, Germany, Jan. 20, 1850. Died at Memphis, Tenn., Sep. 16, 1878, of yellow fever, a victim in the cause of humanity. Erected by his fellow members of the Second Presbyterian Church, Indianapolis, as a tribute to his Christian heroism.”

1880 – We founded the Peck Mission at Delaware and Nineteenth Street, thanks to the generosity of our member, E. J. Peck.

1890 – Dr. Joseph Milburn became our Pastor. It was said he was a great factor in the religious, social, civic and intellectual life of the city. Generous to a fault and keenly interested in the underprivileged, he deserves a great deal of credit for Mayer Chapel. Mayer Chapel was established thanks to the generosity of our member Ferdinand Mayer. It was built on the southwest side of town to further mission work. Its programs included education, athletics, health care and community activities.

1898 – Dr. Charles Hansen was called to be our organist. Blind from birth, Dr. Hansen was one of the great Church musicians of his time. He was our organist for 47 years, making him the Church’s longest term employee.

1901 – Miss Lucy Mayo served in Japan for six years as a missionary from the Church. Due to her work, the Church established the Nippon Mission Circle, which supported her work.

1905 – The Church was redecorated by the Tiffany Studios of New York and the Ascension Window, which you see every Sunday morning at the back of the chancel, was installed in the Church. It was moved to our current sanctuary when it was built in 1959.

1914 – We established an association with Hanover College, which is still maintained. Many of our members have served on the Board of Directors of Hanover College.

1921 – Dr. Jean S. Milner was called as our Pastor. He was our longest-serving minister as he was here for 39 years, retiring in 1960. He took a forceful stand on Darwin’s Theory of Evolution, which almost caused a split in the General Assembly as William Jennings Bryan, a delegate, had introduced a resolution to exclude all members who accepted the Theory. A great lecturer, Dr. Milner filled the Church on Wednesday evenings with lectures on religious subjects, Church history and his trips to the Holy Land.

1942 – The Service Men’s Center was established at Second to serve men on leave from Fort Benjamin Harrison.

1959 – We moved from our downtown location to our current location. Charles J. Lynn, an Elder of the Church, and Dorothy, his wife, gave us the 20 acre parcel on which the Church is located and also a gift of $1,000,000 for construction of the current edifice.

1967 – We built our first addition to the Church, an education wing. We also remodeled the sanctuary and installed a new organ. Also, this year, the first women Elders were installed.

1969 – The first women Deacons were installed.

1972 – Second's minister William H. Hudnut III left Second Presbyterian Church to become a representative in Congress and later the Mayor of the City of Indianapolis. It was said that at the coffee hours at Second "the business of the city often gets done in quiet and caring ways."

1974 – Richard Armstrong was installed as the new senior pastor. From the start his presentations concentrated on the themes of stewardship as "the relevance of Christianity to the marketplace" and evangelism as "teaching people to care, to listen, to love." Armstrong returned to Princeton Theological Seminary in 1979 to work in their new development area.

1977 – Dorothy Nevill, a member of the Church, became the first woman minister to be ordained at Second Presbyterian Church. A Third Age Council was established to focus on activities for retired members.

1981– Dr. William G. Enright was called as senior pastor. Enright was considered to be one of the most accomplished preachers in Second's history. He also saw Second "as a sleeping giant [that] needs to assert leadership- a pastoral approach to problems and goal settingrather than a political approach." He retired in 2004.

1982 – We entered into an association with Westminster Presbyterian Church, the Church we founded in 1864, and that association is still maintained today.

1988 – The 150th Anniversary of the Church was celebrated, and we added the east and west wings of the building.

1990 – Second hosts the funeral of Ryan White, the Indiana teenager who died of HIV/AIDS. His memorial service was a major national event, with guests including Michael Jackson and First Lady Barbara Bush. Elton John played the sanctuary piano during the worship service.

1994 – We began a sponsorship of Dr. David and Emily Matthews, Church members, as medical missionaries to Cameroon, Africa. Our sponsorship of them lasted until they returned to Indianapolis about five years later. We also started a joint worship service with Light of the World Christian Church and we held that service in Clowes Memorial Hall on the Butler University campus. It was called Celebration of Hope.

1996 – We started broadcasting a half-hour service on Sunday morning radio. We expanded our joint service with Light of the World Church to include about twenty additional Churches and the service was held at Market Square Arena with a catered lunch afterward. We also added the Columbarium on the east side of the Sanctuary.

1996 – Indianapolis Great Banquet begins at Second. The Great Banquet is a 72-hour experience -- for three days, guests live at Second Presbyterian Church and study together in worship, prayer, and discussion. The church has hosted more than 110 ecumentical spiritual retreats.

1997 – A gift from an anonymous donor created the Residency in Parish Ministry Program. This program was created to have two or three recent seminary graduates join our staff and learn the ropes about being a minister under the tutelage of our staff. Later (in 2002) it was learned that the gift had come from Tom and Marjorie Lake. Tom had been President of Eli Lilly and Company and also President of the Lilly Endowment. Tom was an Elder at Second Presbyterian Church. The name of the program was changed to the Lake Fellowship Parish Ministry. About $4,000,000 was contributed to support this program from the Lake family.

2007 – We dedicated our newest addition to the Church, which houses the Music and Fine Arts Departments, the youth area and McFarland Hall, a large gathering room for social activities. This was named in memory of Sally McFarland, an Elder and very active member of the Church who died in the prime of her life. Her husband, Dick McFarland, donated over $3,000,000 toward the construction of this addition.

2007 – Second joined with other Indianapolis Jewish, Muslim and Christian congregations to form the Umoja Partnership to address the immediate and long-term needs of orphaned and vulnerable children in western Kenya and Interfaith Hunger Initiative to focus on food security issues in Indianapolis and in Kenya.

2013 – As part of the 175th anniversary celebration, Second constructed an outdoor labyrinth in the classic style of the one at Chartres Cathedral in France. The Northside Mission Ministry opened the Food Pantry onsite to serve Washington Township neighbors. Major financial support was provided to Westminster Neighborhood Services to construct a new Adult and Family Service Center.

2017 – Second hosts an multifaith service of prayer for healing, peace, and unity in our community and nation. Faith leaders from Jewish, Muslim and several Christian traditions led a sanctuary full of Indianapolis residents in prayer and meditation.